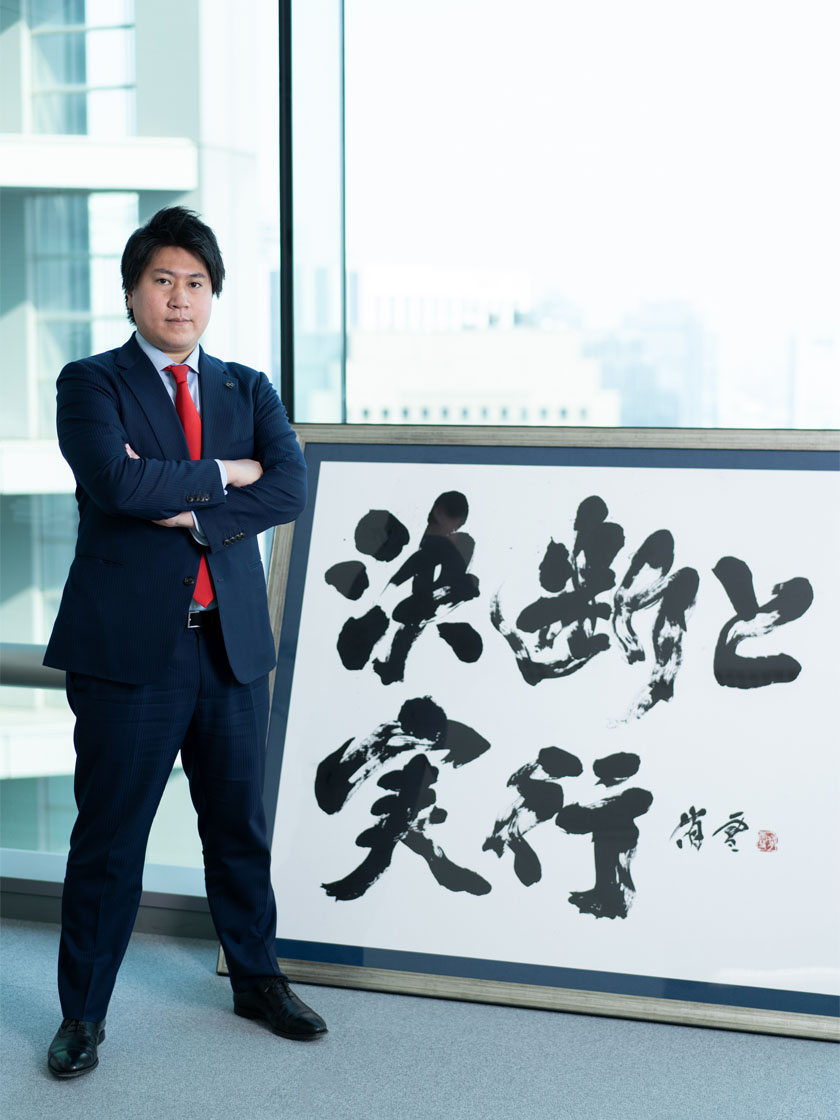 I think it is important to meet with a management partner or team with whom you can discuss things from the same perspective.

What is your business and future plan?

We mainly provide support for the promotion of digital transformation (DX) for major Japanese companies. Our strength lies in our ability to provide a full range of DX support services, from DX strategy planning, new business development, and support for transforming existing business, to digital marketing and improvements to User Interface (UI) and User Experience (UX).
In the short term, we would like to increase our market share in the DX field and expand our business so that customers can genuinely remember us, but we are still just at the starting line in order to realize our mission of "creating a project-based society" where professional human resources gather for the sake of results, with a focus on results. We are aiming to achieve sales of 1 trillion yen by 2045. In order to achieve this goal, we intend to expand our business in the following ways. In the short term, we are considering the development of services that will contribute to the expansion of our current DX consulting business lineup, such as data analysis and system development. In the medium to long term, we will consider M&A and the development of services that can penetrate into industries and business categories where DX has not yet been advanced. 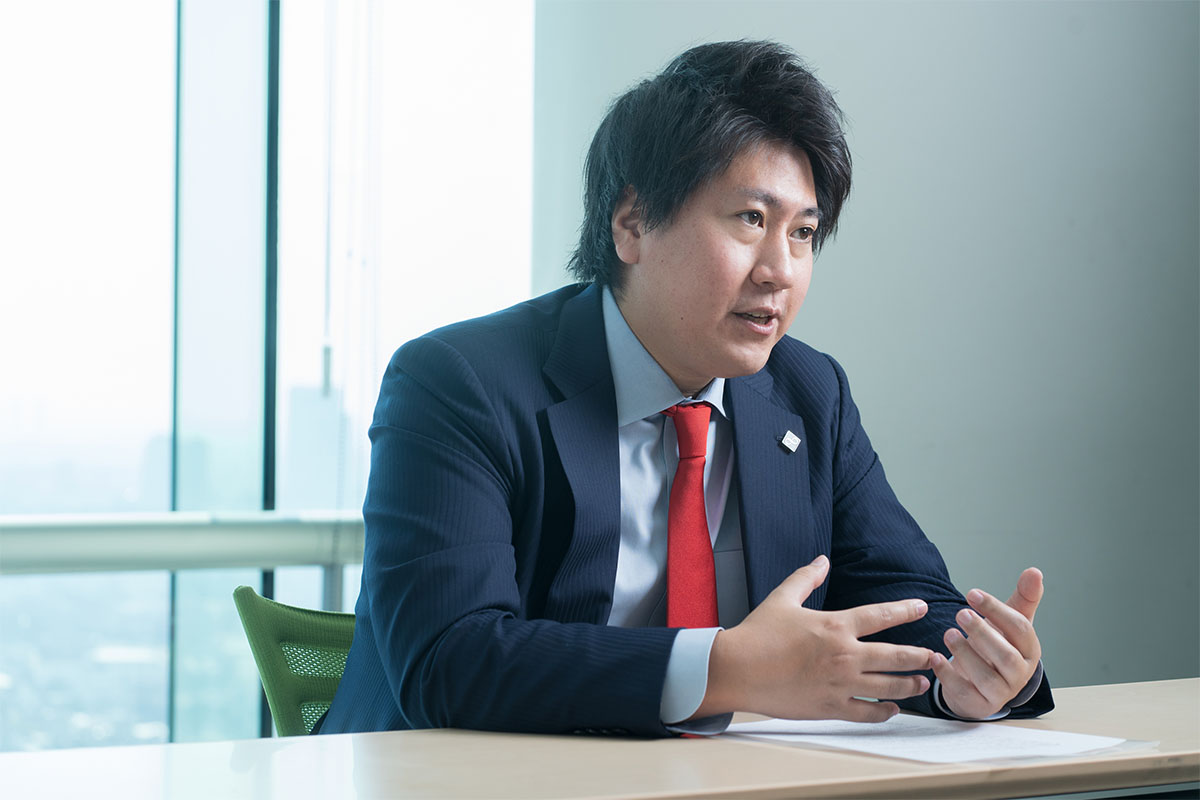 Could you tell us about your motivation for starting a business and your career to date?

I felt that many people, including my fellow students at the University of Tokyo, were trying their best to pass entrance examinations and hunt for jobs, but were not focusing on achieving results in the process. Their eyes, which are supposed to be highly talented, were not shining, and I felt a sense of crisis that Japan would be ruined if things continued in this way.
Ito, co-founder/board chairman, and I were classmates in elementary school, junior high school, high school, and university. Since we were university student and started feeling a sense of crisis, we had been discussing the idea of starting a company together after gaining experience in different fields and achieving results in order to achieve our vision. Ito founded a company in his student days and gained management experience at the company it was sold to, while I gained experience in corporate transformation at a consulting firm.
During my time at the consulting firm, despite the fact that digital technology was evolving at an ever-increasing pace, the company's efforts were mainly focused on superficial digital issues such as website creation and ID management. I always felt that it was necessary to change one’s behavior to think digitally based on the company's internal thinking and the business/organization itself, rather than just superficial small digitalization, and I became convinced through discussions with our clients that we were not mistaken in this direction. Therefore, I decided to start a business in this field, believing that the most important issue for Japanese companies is what we now call "DX".

Could you tell us about your background?

My father was a Go player and my mother was a musician. I grew up watching my parents being active in a society of talent, and I have been involved in music and sports since I was a child, living in a world of competition. I won prizes in piano competitions when I was in elementary school, and played handball in high school and university, and I am proud to say that I have achieved a good amount of success in each.
When I was aiming to become a pianist, I had a goal of becoming No. 1 in the world, but when that dream was cut short, I realized that it would be no fun if I did not pursue a bigger dream then. I decided to enter the University of Tokyo because I thought that in order to expand my possibilities, it would be good to be in an environment where outstanding people gather.
Even after entering the university, I worried about my career path. Since I was a science major, there was the possibility of becoming a researcher. However, it takes decades to be highly rated for a single piece of study of a researcher. My personality and strengths, which include the ability to desperately repeat PDCA cycles in a field where results and feedback are clear and quick, and the ability to compete on a global scale, indicate that I am more suited to business than research and would like to be No. 1 there. As mentioned above, my sense of crisis over Japan's stagnation and discussions with co-founder Ito led me to start my own business, but once I graduated from university, I decided to work for a consulting firm.

Could you tell us about the background of the investment from SBI?

I had the opportunity to talk with Mr. Kitao at a New Year's party, where I told him about our support for the DX promotion and new business development of SBI Group companies and our future growth goals, which led him to consider investing in us. I remember clearly that among the distinguished executives who attended the meeting, Mr. Kitao's aura was overwhelming, and I felt more nervous than ever before.
The reason why we started supporting the SBI Group before we received investment was that I was asked to support a project by a person who was working on the creation of an internal system for one of the companies in the SBI Group. One day at a meeting, we happened to talk about another project and I said, "I can help you. Please let me do it." I threw my hat into the ring and was entrusted with the project, which resulted in a great achievement. After that, I was entrusted with a variety of projects at other companies in the group, and I have continued to work with them to this day. 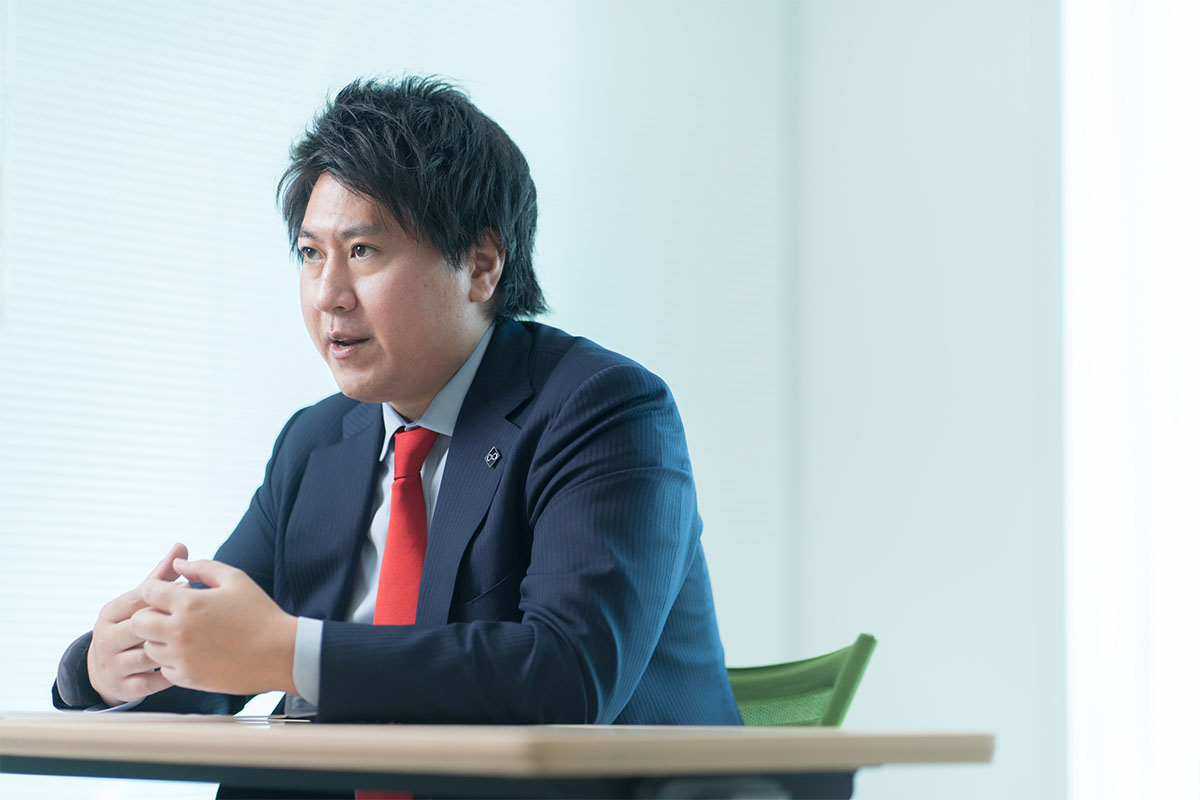 What were the evaluation and good points of SBI and what were the deciding factors in accepting the investment?

We were grateful for the advice we received from Mr. Kitao, Mr. Kawashima, Mr. Takamura, and other experienced managers from SBI Group companies, who enhanced our management perspective. Another major factor was the fact that I felt that the atmosphere seemed to have a good fit as a company through the support we had provided SBI Group companies prior to receiving the investment.
I also felt that SBI has a strong sense of ownership in the expansion of the business of the investee, both at the management level and in the field. Mr. Tanaka, the capitalist in charge of us, had always told us what kind of support the SBI Group could provide before receiving the investment, and in fact, he introduces us to a number of regional banks and partner companies, with whom we have provided support since then. In each case, we would not have been able to connect with these companies without their referrals, and we are very grateful for their support in expanding our client base.
As a result, we were able to successfully achieve the milestone of "going public in our sixth year of operation," which we had set since our founding, and we believe that the investment from SBI had a significant impact on our success.

Can you tell us about any obstacles or difficulties you faced after starting the business?

Not so much barriers or difficulties, but we had one thing. We were able to verify early on that if we went deep enough in one project and produced results, we could win other projects for the same company; however, we were not sure if the same style would work for other clients. We were able to verify that our style was correct through various projects for the SBI Group, which helped us a lot.

As the organization grew larger, the distance between me and some of the employees became greater, and there were times when some of them became disconnected from the consulting style I had envisioned and the direction the company was heading in. By repeatedly and thoroughly communicating the corporate culture such as our work style and code of conduct during induction training and at weekly morning meetings, the entire organization gradually became aligned with the same direction. I felt that it is especially important to clearly communicate the corporate culture during the process of growing an organization. What do you value on a regular basis as a manager?

In Japanese it is called "lastmanship." It means having the idea that you are the final line of defense for the entire job, and if you collapse, the entire job will be useless. I am always aware that I am responsible for everything, no matter how trivial it may seem. I am prepared to take responsibility for the lives of all the people we hire, and when an employee makes a mistake, even if it seems like, to other people, "Surely that is not Mr. Doi's responsibility?" I believe that I am ultimately responsible for any and all mistakes made by our employees, even if other people may think that it is not so.

Do you have any advice for young entrepreneurs and those who will start their own businesses in the future?

The most important thing for a company is its vision. The key to success is to have the biggest vision you can, and if it is half-baked, it will be achieved at a certain scale and the company's growth will slow down. My sense of crisis over Japan's stagnant future led me to co-found our company with the vision of "creating a project-based society" where professional human resources gather for the purpose of achieving results with a focus on results. I believe that our clients and employees have chosen our company because we have been sincerely and thoroughly committed to this vision.

It is never easy to create a vision, but in my case, I was able to do so little by little through a process of bouncing my ideas off co-founder Ito and verbalizing with him about what fires me up and when I feel passionate about something. I think it is important to meet with a management partner or team with whom you can discuss things from the same perspective.

As an aside, I mentioned earlier that co-founder Ito and I were classmates in elementary school, junior high school, high school, and college, and we were in the same club activities and class together for five of our six years in junior high and high school. One of the most intense times I spent with Ito was in high school, when we studied together every day in the "University of Tokyo Entrance Exam Project," which was launched by members of the same class, including him. In this project, we reported our daily study time and one sentence of the day by e-mail, taught each other study methods and areas we did not understand, discussed subject-specific scoring strategies, etc. Although the entrance exam was an individual game, we were like a team, aiming to pass the University of Tokyo entrance exam. Since I failed the high school entrance exam to the school of my choice, I realized that it was not enough just to work hard, so I carried out the project while absorbing Ito's study methods and ideas, and managed to pass the exam by the skin of my teeth. By sharing the hardships and successes, the bonds we formed deepened as a result, and I got the sense that if I worked with him, we could make it work. This could be said to be the starting point of our company's vision of "creating a project-based society."