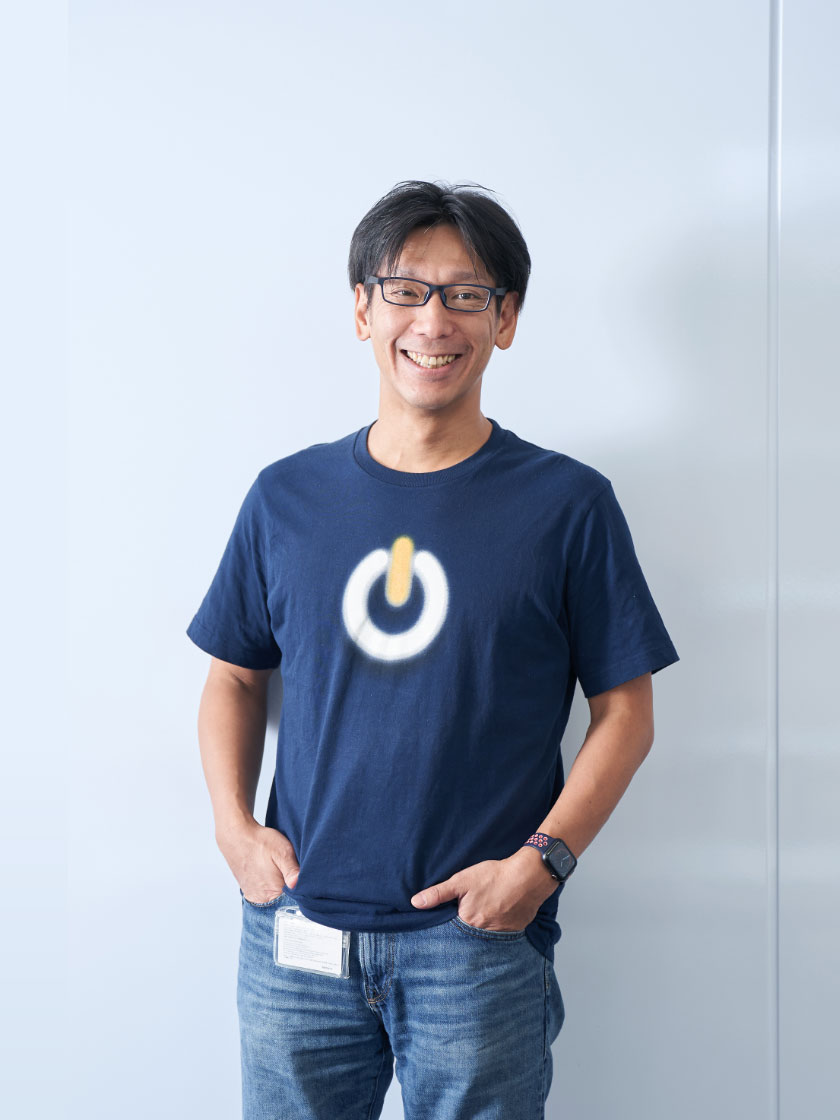 SBI has leveraged their group companies’ resources to support us and I thought that it was a unique way to receive support.

Please tell me about your business.

It is reasonable to treat patients with these switches on genes because all genes are controlled by a switch. To be more specific, our body is made up of about 37 trillion cells, which are classified into more than 200 types, including liver, nerves, and muscle cells. However, each cell has the same copy of DNA because it all originally started with a single fertilized egg. Nevertheless, it ends up as cells with different shapes and functions because among the 20,000 genes that are coded with three billion bases (DNA), there are controls for certain genes to become on or off in certain cells. All 20,000 of these genes have something like a switch box, which controls which genes to turn on and off for each cell. If these switches are set the wrong way, we get diseases. We are researching how to treat diseases by restoring these switches to their original positions. 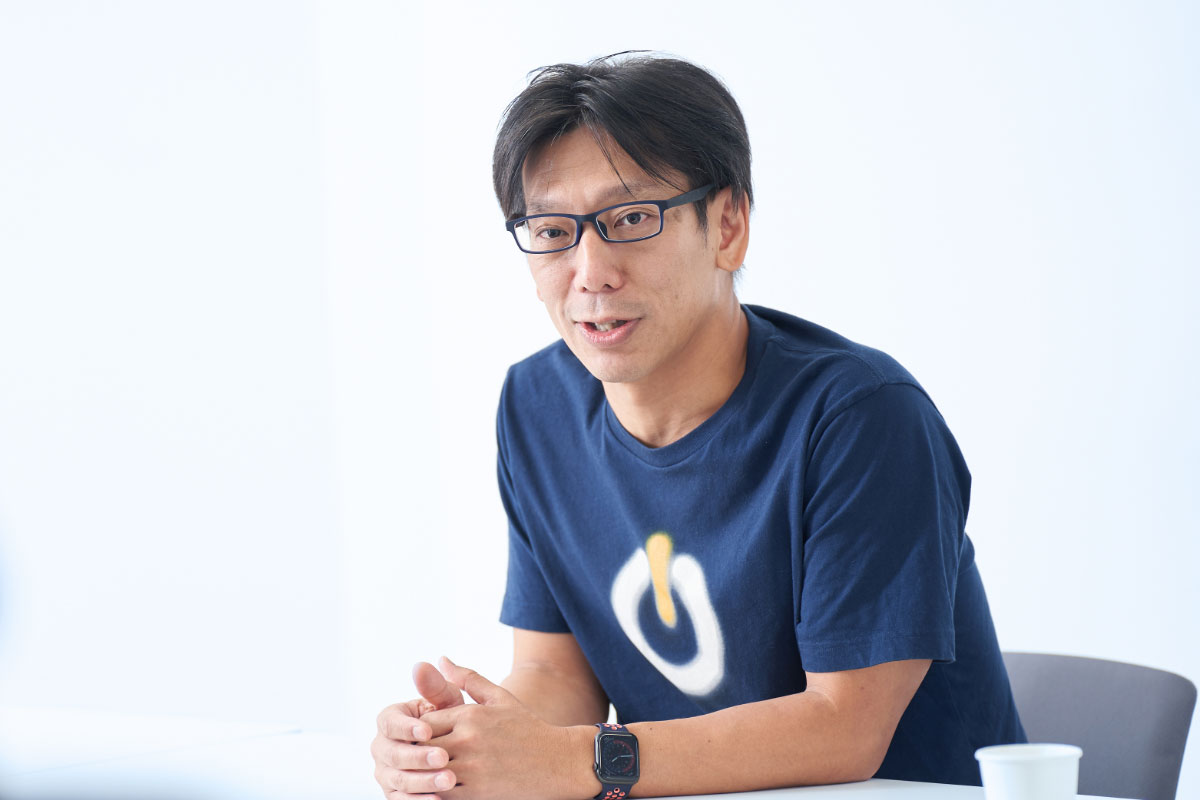 Please tell me about your career so far and how you came to start your own business.

During my undergrad, I researched molecular biology, then worked at Kirin Brewery Company, Limited [now Kyowa Kirin Co., Ltd.] on drug discovery research in the field of biologics, which was a new research field at the time. At that time, Kirin was working with Amgen, a biotech company that later became a global megapharma, and I was first assigned to a joint research project with Amgen. Amgen has the most advanced approach and way of thinking in biotech, and it goes beyond organizations and decisions to achieve its goals, carrying out efficient R&D in an “Objective Driven” (goal-oriented) manner. I was inspired by their approach, and thought this was anideal environment to execute research work.

Not just only Amgen, but other overseas biotech companies that were our business partners, were developing and thriving their businesses, rapidly growing at a large scale. This made me feel frustrated with our environment that was not able to do the same. I realized that no matter how cutting-edge science is, if we are not able to commercialize it well, it brings negative consequences to both researchers and the company. So, I decided to move to a consulting firm and solidify my career to integrate business and science.

During my two years at the consulting firm, I learned a lot about businesses. On the other hand, consulting does not mean sitting in the driver's seat and drive your own business. Then I decided to join a biotech startup to gain experience in driving business by myself. After that, I founded a company and served as representative for eight years. We managed to get to Phase 2 in our research, then I left the company and spent some time traveling overseas. During that time, I decided that next I wanted to found a business based on R&D for rare diseases. There is a reason for this. Although drugs for rare diseases have great social significance, major pharmaceutical companies are not so active in this area, and startups can beat major pharmaceutical companies with the speed of their decision-making. While searching for technologies to combat rare diseases, I learned about Professor Nureki from the University of Tokyo, who has become a co-founder of our company. I first tried to attend his seminar which he was to give lecture on genome editing but the fee was 40,000 yen which was quite expensive. I reached out to him directly and requested for a meeting. He gladly accepted it, and yes I was able to save my 40,000 yen!

Our two-hour discussion got hyped up – the technology we discussed was intriguing and we both thought that we could turn it into our intellectual propery, I asked him to found a business together. Fortunately it turned out that Professor Nureki had just been thinking about starting a business on his own, so we agreed to build a business together on the same day. 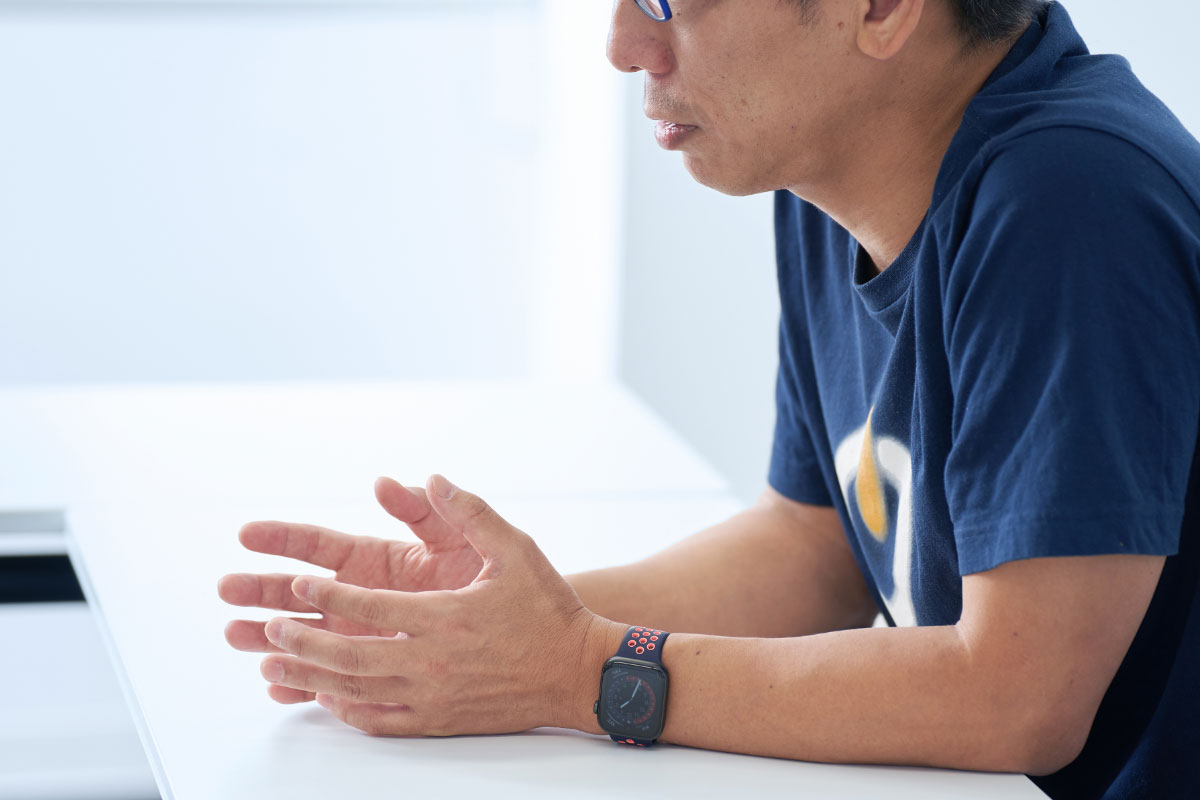 Please tell us about how you received investment from SBI and any support received post-investment.

SBI invested in both Series A and Series B. SBI was very proactive in our investment– evaluated our businesses prospects highly and invested us with a larger ticket than we initially anticipated. After our IPO, we have continued receiving support from other SBI group companies. SBI has leveraged their group companies’ resources to support us and I thought that it was a unique way to receive support.

But SBI supported us by giving us an opportunity to increase our publicity through an interview with the Chairman Kitao on a TV program, which was a major boost for us. We believe that SBI's investment had impacted us to increase our value and credibility publicly. 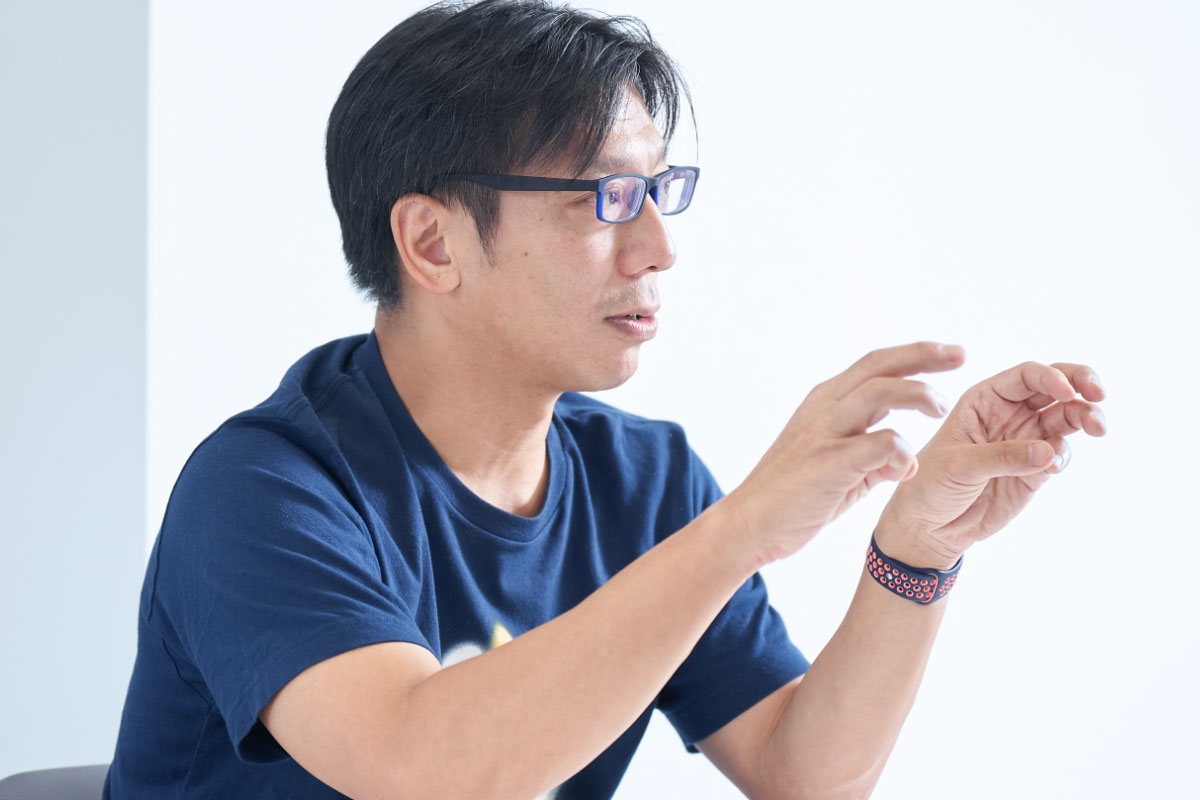 Did you face any difficulties prior to your IPO?

Luckily enough, I don’t think I went through extremely rough time to go public – we went IPO about three years after receiving investment from SBI and approximately four years and seven months after we founded the business. We were lucky enough to progress our business as planned initially.

Although the market was momentarily shaken by the impact of COVID-19 just before we went public, the business was progressing steadily, so I think we went IPO at a good timing. However, this was a result, and I think that we were able to stay stable in the face of difficult circumstances because Since day 1, we worked extremely hard to steadily develop our business, stacking one brick on top of another which I believe has helped us to be resilient under difficult times.

Why did you choose to raise funds and get public in Japan, even though you have a research center in Boston?

The first reason is that the origins of our company's research are in Japan.

The second reason is that four companies in Boston engaged in CRISPR genome-editing have already been listed, and we determined that it would only bring minor impact to our company if we come the fifth listed company in the states. In Japan though, we would be the first Japanese genome-editing company to be listed which I thought would bring huge impact to the market.

Another reason is accessibility to capital. While startups around the world tried to raise money from venture capital funds in Boston, we had strong connections with Japanese investors. When we asked ourselves, “From which region, could we raise capital with our competitive advantage – investors in Boston or Japan? The answer was Japan.”

Previously it was difficult for Japanese investors to invest in genome-editing startups that are expanding globally like ours. I think it also gave confidence to investors that we raised funds and went public in Japan. 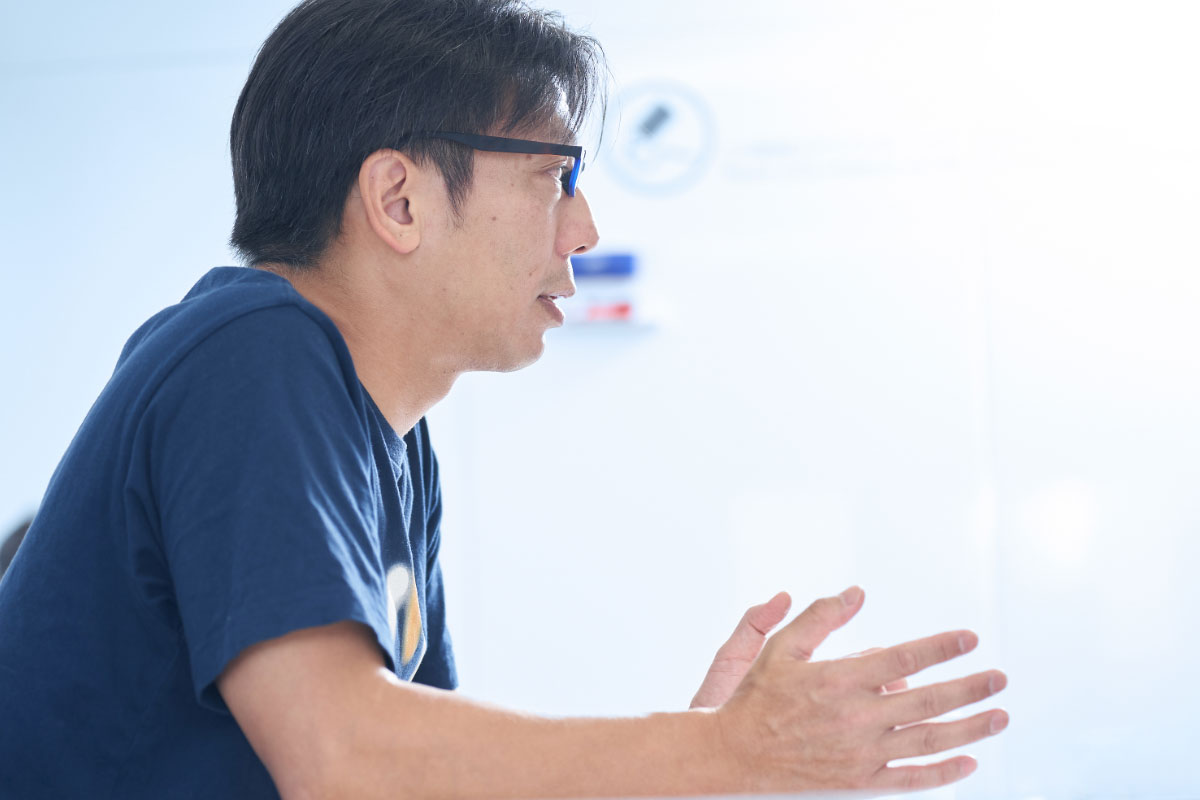 What do you value on a day-to-day basis management when running a company?

People (employees). The basic strength of a company depends on its people.

Individual employees turn our ideas into reality. With the contribution of talented self-driven employees, our businesses can progress and grow beyond our imagination. So, people is the key. If you have the right people, then your company will definitely grow.

I completely agree with the Japanese proverb of "people are stone walls, people are castles" (i.e. the strength of an army lies in its men). Hiring good people is the most important job of the president of a company, and if he can do that, he has done just fine.

Do you have any advice for startups that are going to raise funds or people who are going to start a business?

We have plenty of money now, but it won't last long. It is important to focus on business in a steady manner, without getting too excited. Speaking from over a decade of experiences running a company, an unprecedented crisis or completely unthinkable crisis occurs around once every two years. The global financial crisis, the Great East Japan Earthquake, and now COVID-19 speak to this fact. To prepare for these events, we must build a solid company. It’s not about not accessing funds when you have plenty of money, but you shouldn’t spend more than you need on an office or something else that doesn't make money just because you succeeded in raising funds. Even if you succeed in raising funds, it is important to keep a tight hold on your purse strings and focus on your business while making necessary and appropriate investments.