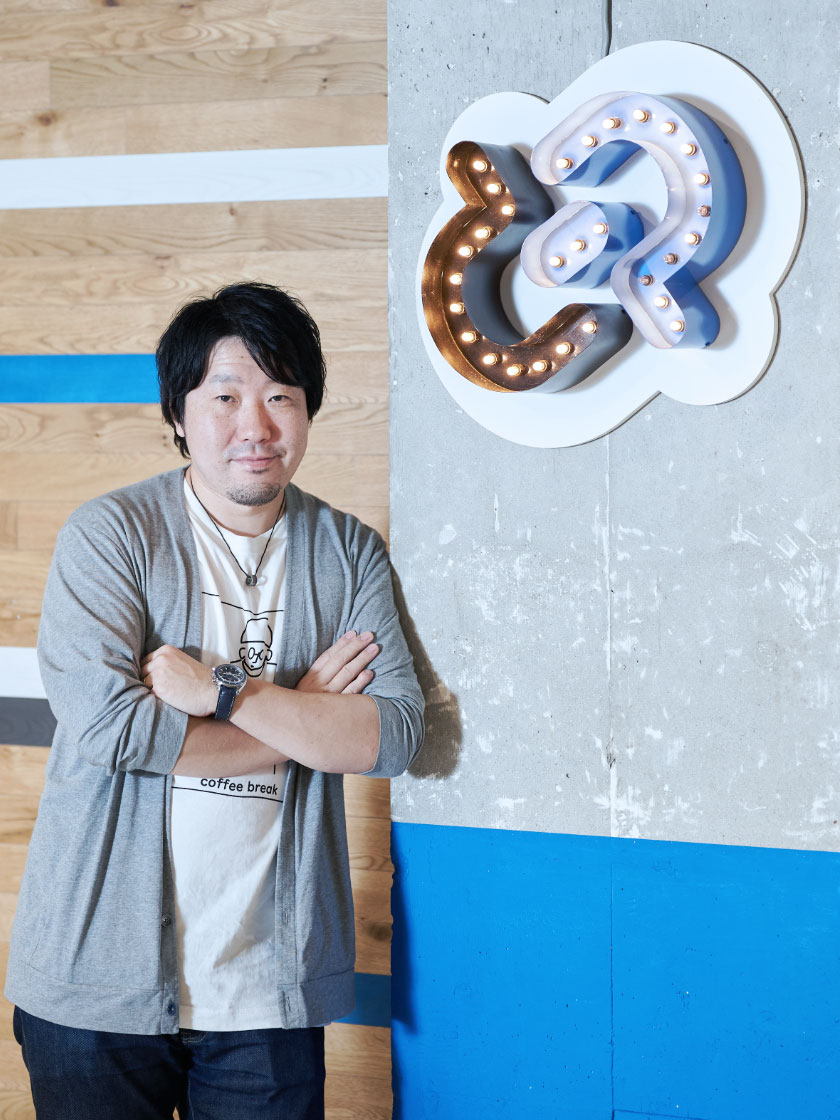 SBI introduced us to SBI Group deals, and these projects are still ongoing

Please tell me about your business.

As a global design company that uses the power of design to drive evolution in business, we provide UI/UX design, business design, brand experience design, etc., for smartphone apps and other products and services in the digital domain.
We are not basing on contract to design products and services so that they look nice or appear well put together on the surface. Instead, we provide comprehensive support for everything from business and product strategies to the surface layer. 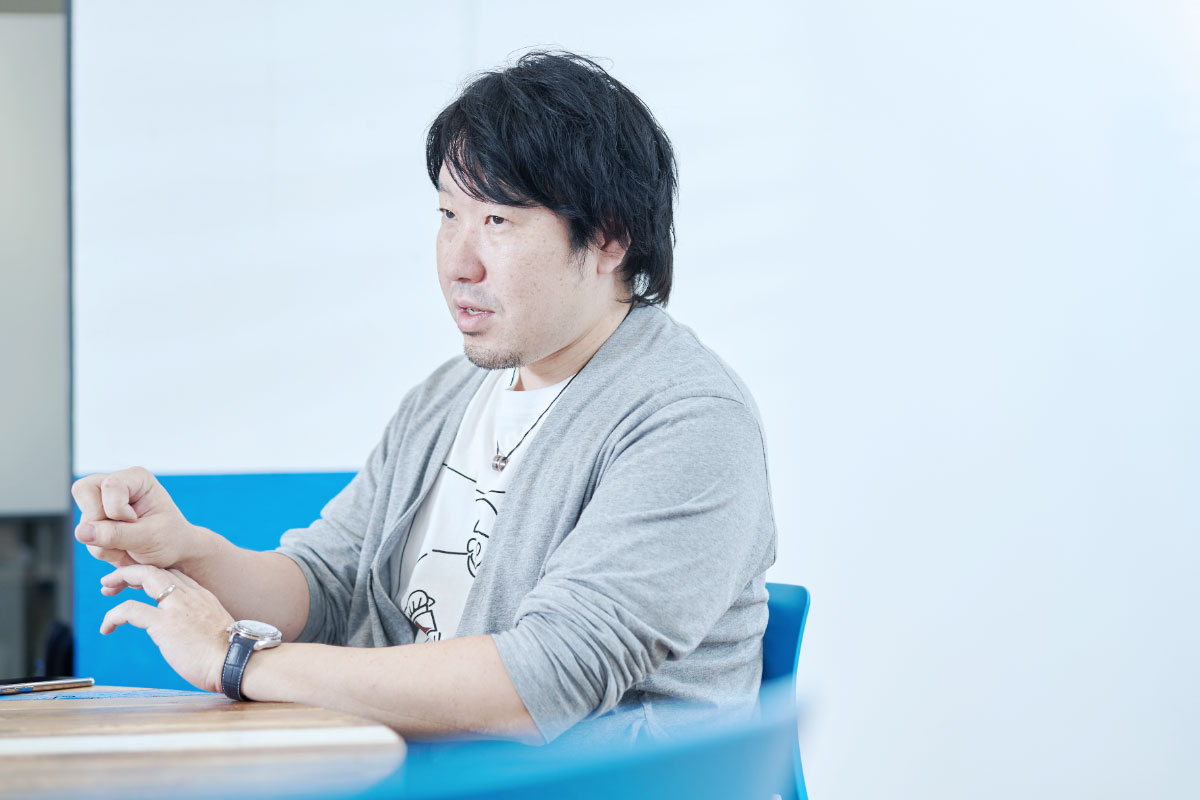 Please talk about your career so far and how you came to start your own business.

When I was in college, I suffered from a serious illness, and I also learned about Mr. Son of Softbank Corp., [currently SoftBank Group Corp.] and Mr. Mikitani of Rakuten, Inc., in lectures on startup theory. These two things had a big impact on my outlook on life, and I decided to drop out of university to start a business. When I was 22, I made a resolve to start my own business by the age of 30, and I spent several years as a consulting sales representative for e-commerce site operations and as a web director for a web production company. When I was 27 years old, I found out that my grandmother had left me some money. It was as though she was telling me to start my own business, so I decided to quit my job and start my own business. 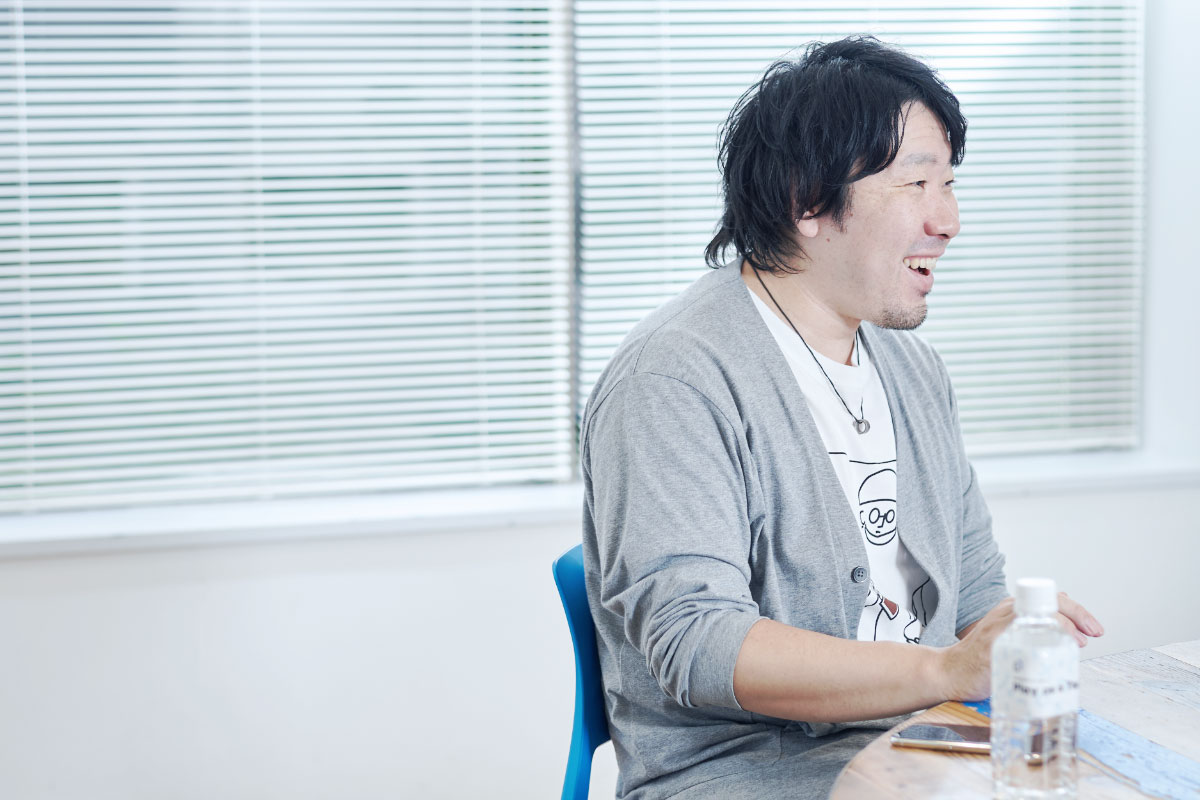 I attended various seminars for entrepreneurs while looking for business ideas. The impetus for me to move to the U.S. was a lecture given by Ms. Namba of DeNA Co., Ltd. "Those aiming to start businesses shouldn't have teams made up entirely of Japanese. Make an international army for a global fight,” she said. The following day, I decided to go to Silicon Valley.
While I was looking for a place to work in Silicon Valley, I managed to get an introduction to the president of a design company in San Francisco through various connections, and I somehow passed the internship selection. I went to the U.S. with my wife and my eight-month-old daughter. I couldn't speak English, and had never even been abroad. It was totally foolhardy for me to quit my job as a salaried worker and take my wife and baby to San Francisco to go and work as an unpaid intern , but I thought at the time "If I don’t go now, I won’t be able to live as an entrepreneur."

In 2011, when I went to the U.S., San Francisco was in the midst of a startup boom, with it being just under a year since Uber had launched its service and around six months since Instagram launched. As a participant in startup pitch events on an almost daily basis, I was deeply impressed by the simple, beautiful, and easy-to-use UI of products, even those still in their beta version.
In Japan at the time, multifunctionality was considered more important than UI, and the status of designers was also very low. However, I was convinced that design would eventually become viewed as important in Japan as well, and in September 2011, I established our company.

I heard that you weren’t originally targeting an IPO. How did you come to change the direction?

I started my business in UI/UX design, which is a contract business and hard to scale. As such, I thought we were not the type of company that would aim for an IPO. For me personally, I had dropped out of college, I hadn’t worked for any big companies, and I didn’t have any track record that I was proud of, so I actually thought it more likely that I’d be out of business in a few years before any IPO.

Somehow, we had managed to keep our business until our third year after founding. Then, we received capital from outside sources for the first time because we were faced with funding needs that we could not cover by the amount we could borrow at that time. At this point, we had no choice but to go for an IPO or M&A, but at the time we thought either of the options could be taken.
We decided to pursue an IPO because our sense of mission became clear as we put our vision and mission into words - "Why is Goodpatch doing this?" and "Why is it necessary for society?" - right around this time. 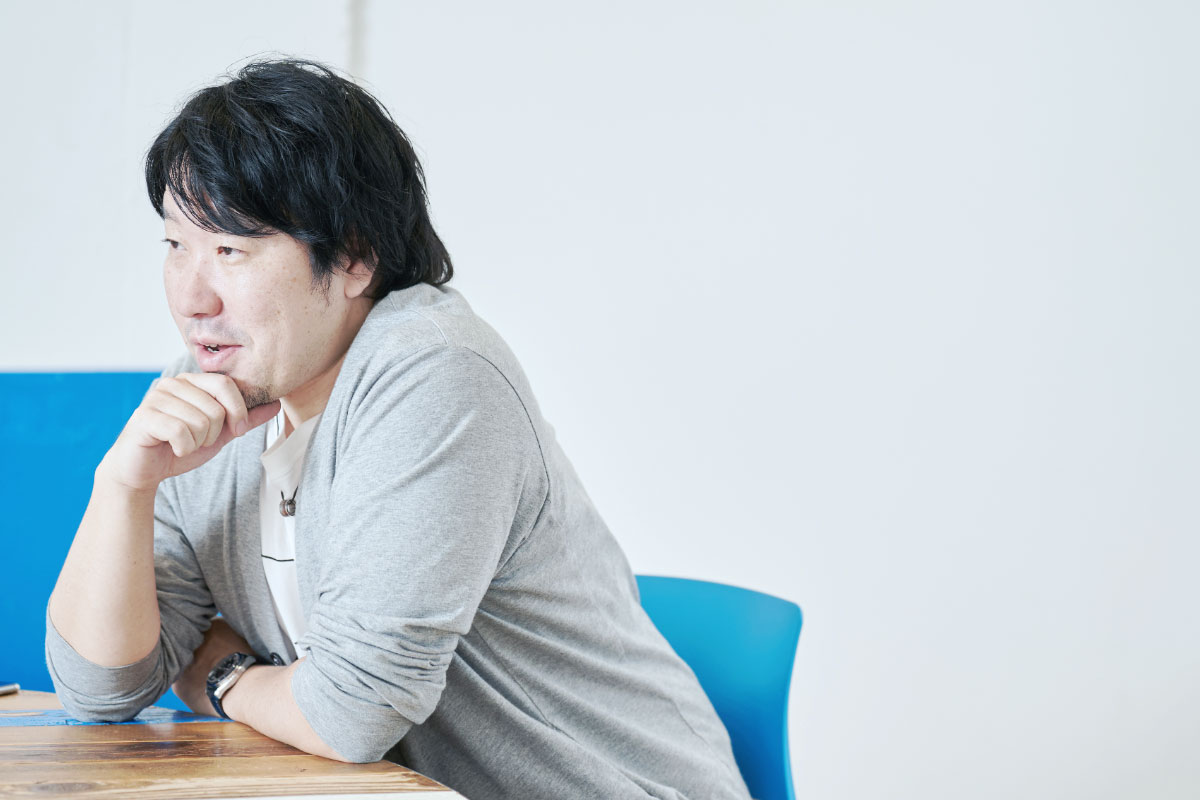 All our company employees love design and believe in the power of design. However, in Japan, people think of design as surface layer decoration, so no one can say designers are treated well.
Looking to the future, it is obvious that Japan, as a society with a declining population, must enhance its capabilities as a country by engaging in creative work, including design, rather than manual labor. However, if the social position of designers and the design industry is low, such work will not attract high-quality talent. In such an environment, the industry as a whole will naturally remain lackluster. I wanted to change this situation.

I want to increase the value of design itself in society and thus create a society in which designers are happy. We thought that in the future, as we stood at the cutting edge in the UI/UX sector of the clearly rapidly expanding digital domain, there would be no company with such a mission other than us, so we decided to go for an IPO and not sell our company regardless of what kind of M&A offers we received. This all took place six years ago.

When we received the first investment in 2016, the amount was small, so I didn’t feel particularly strongly about it, but I was impressed when Executive Vice President Goto said, "I really wanted to invest more, so please let me know next round."

After that, around the time when we received an additional investment from the FinTech Fund in Series C (2017), the fintech sector was in full swing, and the importance of design in products and services was growing.

We decided to accept the investment, partly in hopes of providing UI/UX support to fintech companies in SBI’s network.
In fact, after the investment, we were introduced to a number of SBI Group companies, and we are still doing business with them.
In addition, we received support mainly through the introduction of deals, but, for example, WealthNavi achieved overwhelming growth by partnering with SBI. I think it is surely beneficial to expand the user base through business tie-ups.

What is the outlook for your business?

We intend to steadily improve our business performance by winning large projects through the promotion of digital transformation (DX) in society as a whole. We will also expand our business from design to the areas of strategy and technology.
In addition, we will grow our "Strap" product in the SaaS business and increase the number of new SaaS-type businesses in the future as well. We will work steadily to support UI/UX design in our design partner business while building up our SaaS-type business. 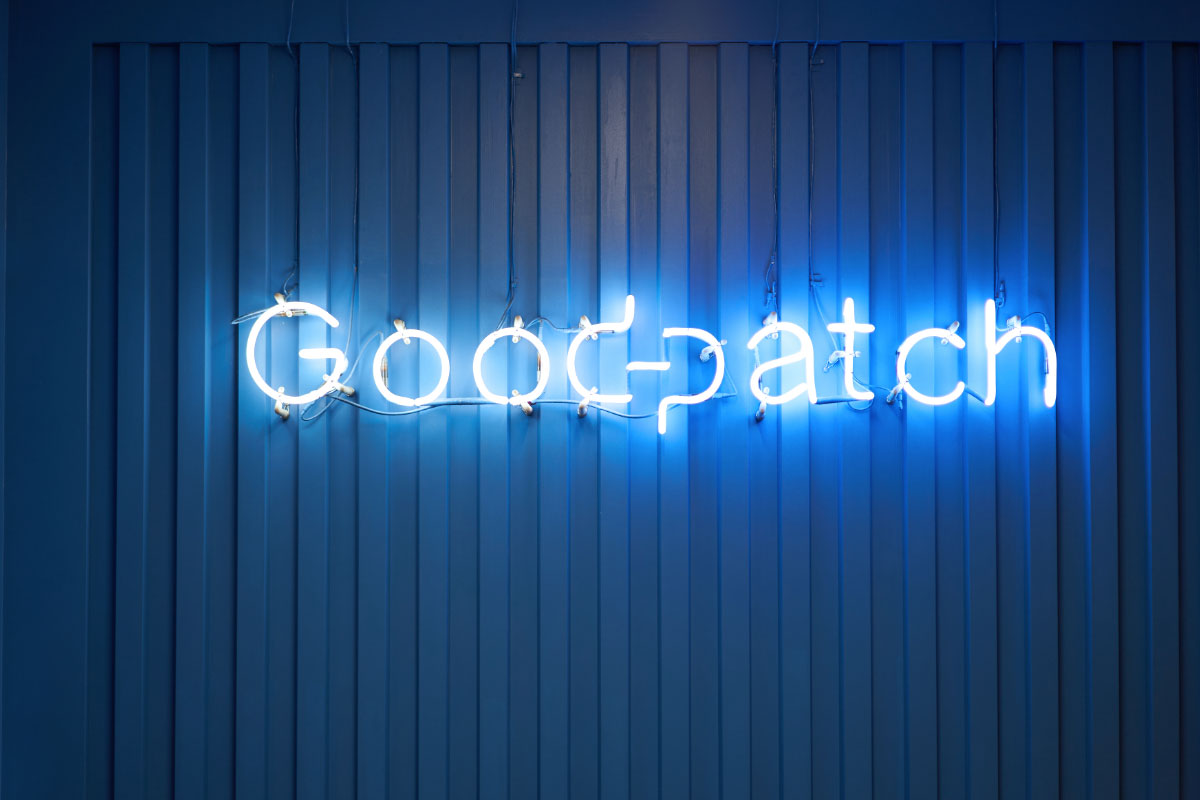 Do you have any message for those who are considering starting a business or raising funds in the future?

With the expansion of the venture capital market, investors have more options and there is more money to be invested than before.
For precisely that reason, you take your time and select a good investor, but since investors are also partners, I think it is important to accept investment from someone (a venture capital investor) whom you can see as a partner on your journey.
In many cases, investments made starting from business tie-ups or alliances do not work. So that’s just an "extra."
I think companies had better decision on investors by seeing if they would act as someone rowing alongside them as they develop their business together.