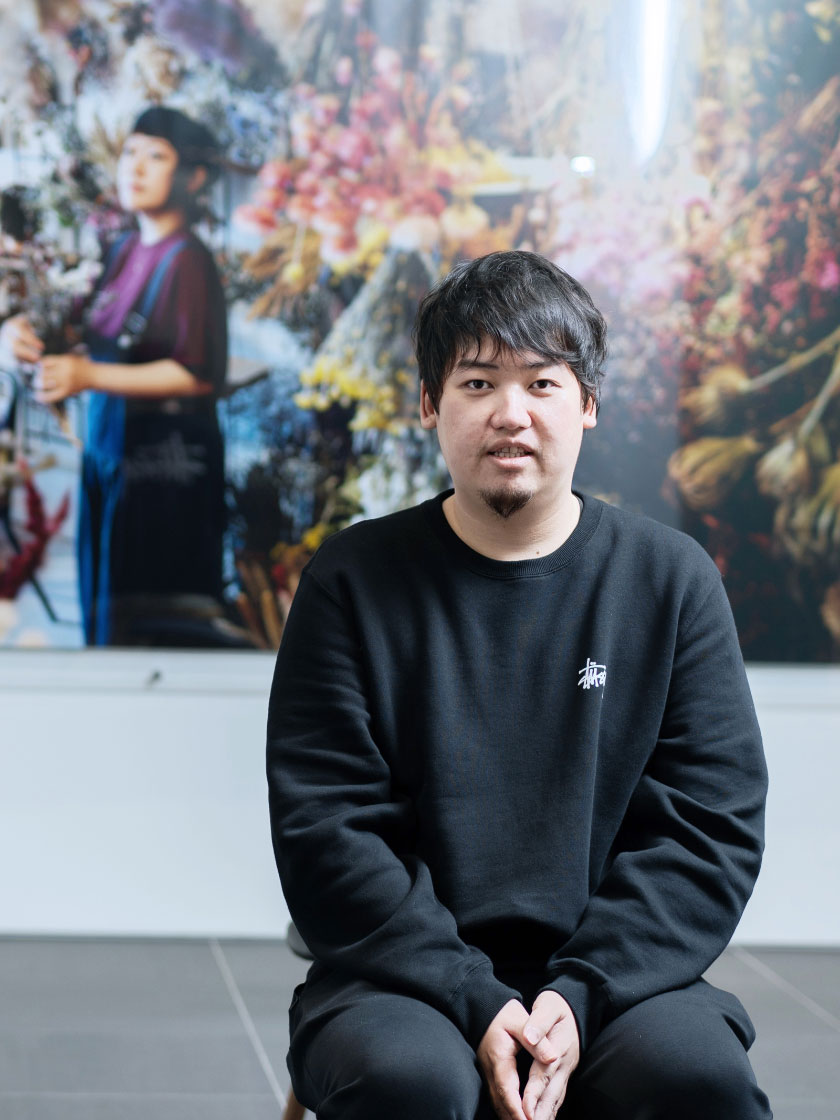 There was added value that could not be achieved by money alone, including business support and enhancing our perspectives as managers

Please tell us about your business.

Founded in December 2012, BASE provides an e-commerce platform "BASE," which allows anyone to easily open their own original online store.
In the past, it was common for companies with in-house engineers and designers to create online stores themselves, and for companies with ample funds to outsource the creation of such online stores to production companies, but BASE is unique in that it enables people who are in the manufacturing industry to easily open online stores on their own. The interface is easy for anyone to use, and we only charge after the transaction is complete so there would be no unnecessary risk on our users. Also, in the past, the solution for creating an online store and a solution for payment would be provided by different companies, but our company offers a one-stop solution providing all the necessary functions for online stores. This service enables even those who are not familiar with the internet to start an online store immediately and easily. 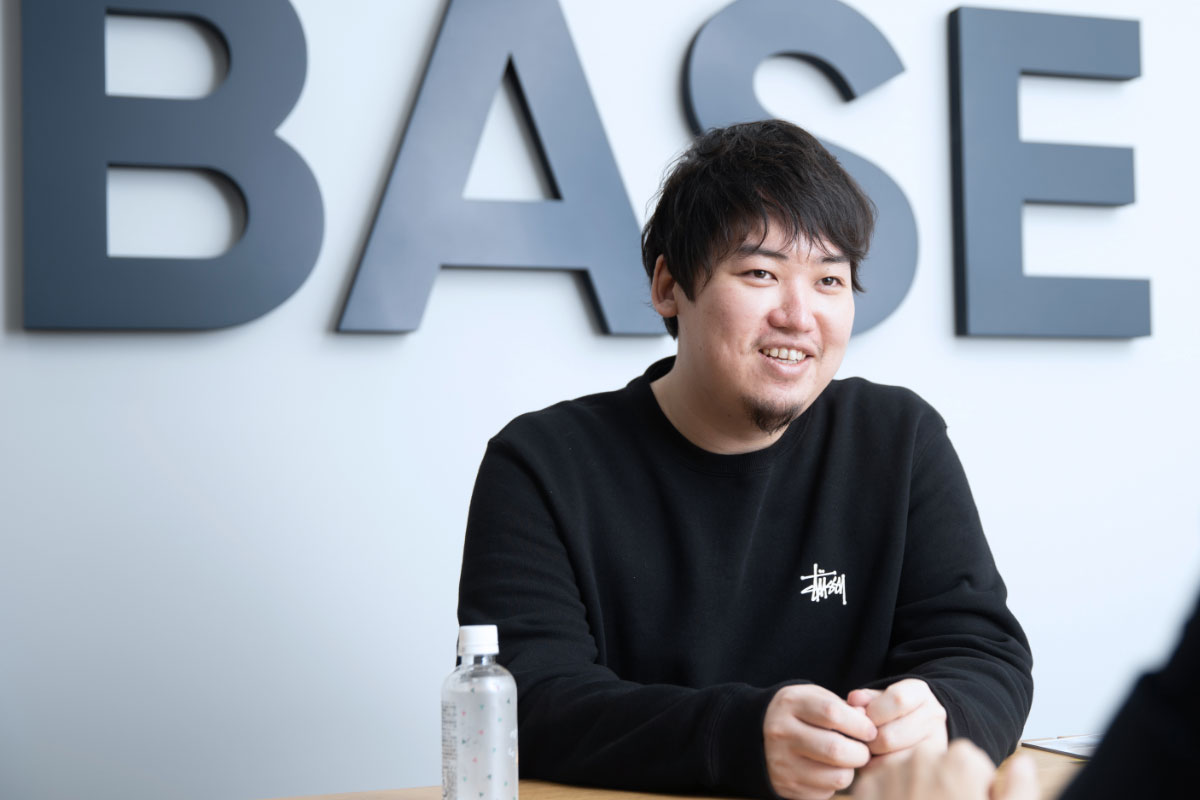 I heard that the reason you created the service is that your mother said “I want to open an online store, but it is too difficult to understand”.
Why did you decide to make a company instead of a small business, and why did you aim for an IPO?

I’ve always liked making web services and worked as an engineer intern at CAMPFIRE, run by Kazuma Ieiri, but I had no intention of starting my own business. By the way, my salary as an intern at that time was 10,000 yen per month, so I was already in the red just paying for my commute, but in fact, this amount actually worked in my favor. The company valued me at 10,000 yen, so it was easy to study many things and I really learned a lot.

After that, when my mother said she wanted to open an online shop, I wondered if there might be people who would like to take on the challenge of an online shop just like my mother. And I personally liked payment services, so I started the service called “BASE” after getting some ideas from general trends. At first, I was fine doing things solo, but after the service launched, it attracted many users, so I began to feel a sense of responsibility to provide my product in a stable manner. I also decided to start my own business after receiving advice from some friends who were investors. Although, personally, I like making products the most. I thought that a company would be necessary to make products, so rather than wanting to start a business and run it, I positioned it as a company for making appropriate services and eliminate as many obstacles to that goal as possible. That's why I feel like I've always been creating services since I started my business.

As for the IPO, since our founding we had been raising funds through equity as a means of achieving top-line growth, rather than focusing on profits, I thought that it was our responsibility to eventually exit in that manner. Aiming for an IPO was a simple, or perhaps an inevitable decision to ensure that our long-held dream of providing good products could become a reality. 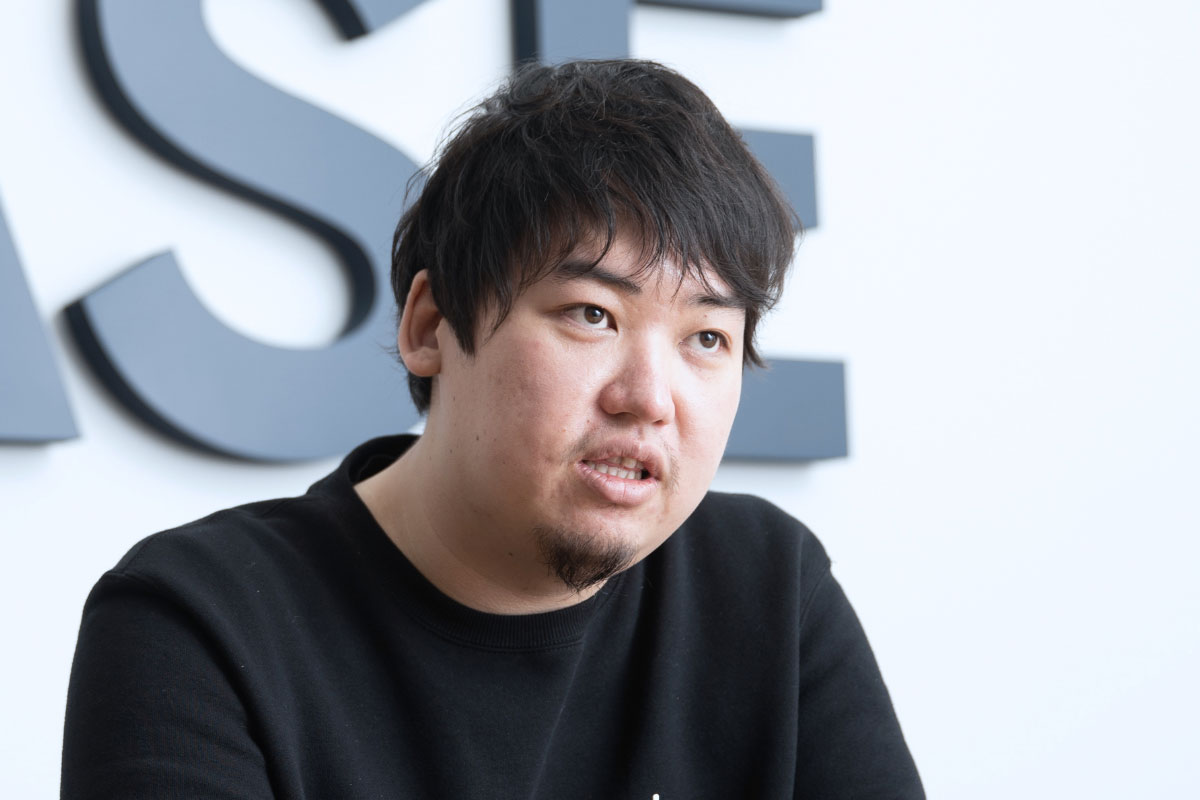 Was there any particular moment when you realized your service could succeed?

"BASE" is a service that grows slowly over a long period of time, rather than doubling every year. In that sense, there was no particular moment that we realized it was doing very well. However, since our founding, we have grown considerably every year, so I knew that if we continued working hard and not give up, we would eventually be able to repay the faith of our investors and shareholders.

What is the outlook for your business?

We will continue steadily doing the same things as before. "BASE" has always been about empowering individuals and small teams through the internet and online products. We have grown this much not because users switched from different platforms to our company’s services but because as the power of individuals and small teams has gradually increased, we have been the service provider of choice for people who want to take on new challenges online. It is a service that needs to grow over a long period of time by keeping pace with changes and trends in the world, rather than spending money and time to launch major sales campaigns and aim for dramatic growth.

In the future, I hope we will simply continue to reinforce what we have been doing. Rather than needlessly diversifying and creating numerous commoditized businesses, we will take on new challenges without losing sight of our past and our mission. 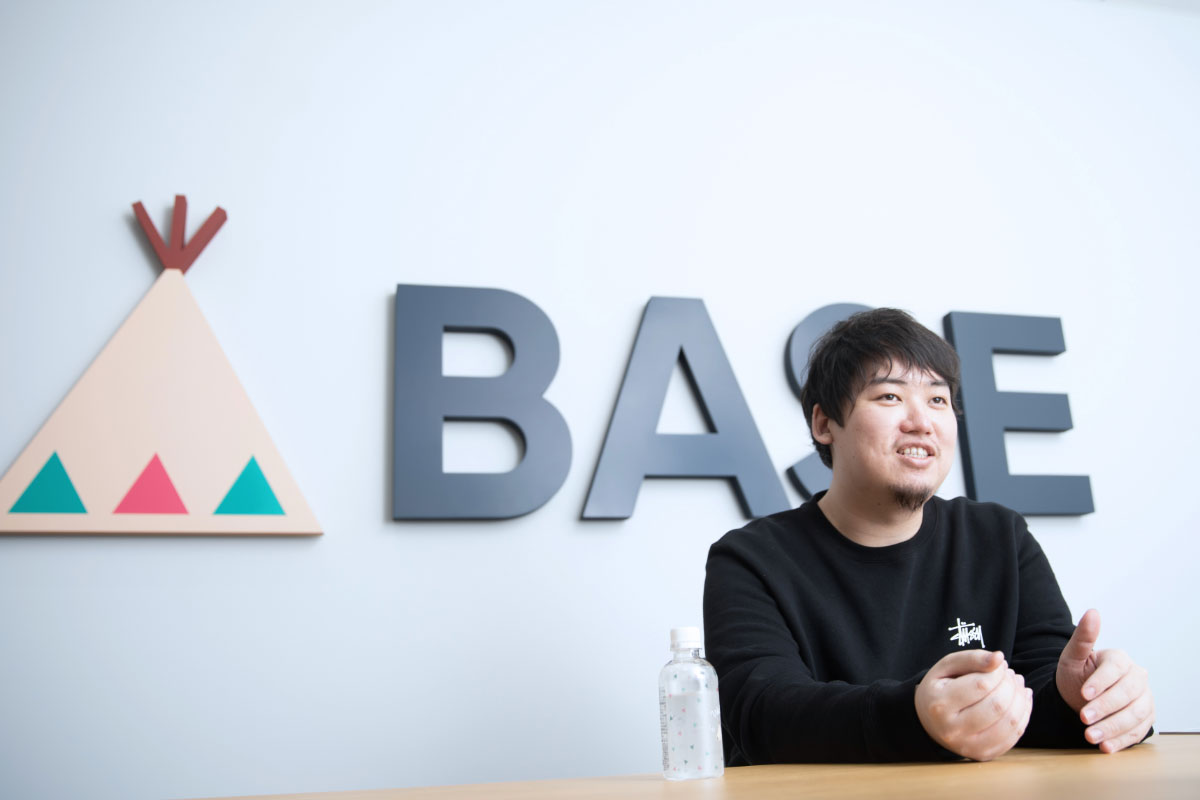 May I ask you about post-investment support?

After SBI invested in us in 2016, they introduced us to many regional banks as partners for tie-ups. I was invited to a number of meetings and events attended by the top management of regional banks and financial institutions, and introduced to people I would not be able to meet directly on our own. Furthermore, through daily communication with Mr. Kitao and other senior executives of SBI’s group companies, as well as Mr. Tanaka, who is in charge of investment, I raised the level of my perspective as an executive. In addition, the SBI Group actively introduced our company through its IR activities and day-to-day sales activities, which helped to spread awareness among people whom we would have had no hope of reaching ourselves, and has helped us gain credibility.

What was the major reason for choosing SBI as an investor?

This was due in large part to SBI’s high opinion of our company's products and services and the fact that they committed an unexpectedly large investment in a short period of time. I still remember that I was very nervous when I met Mr. Kitao because it’s extremely rare for people from startups to have the opportunity to meet entrepreneurs and managers at his level. 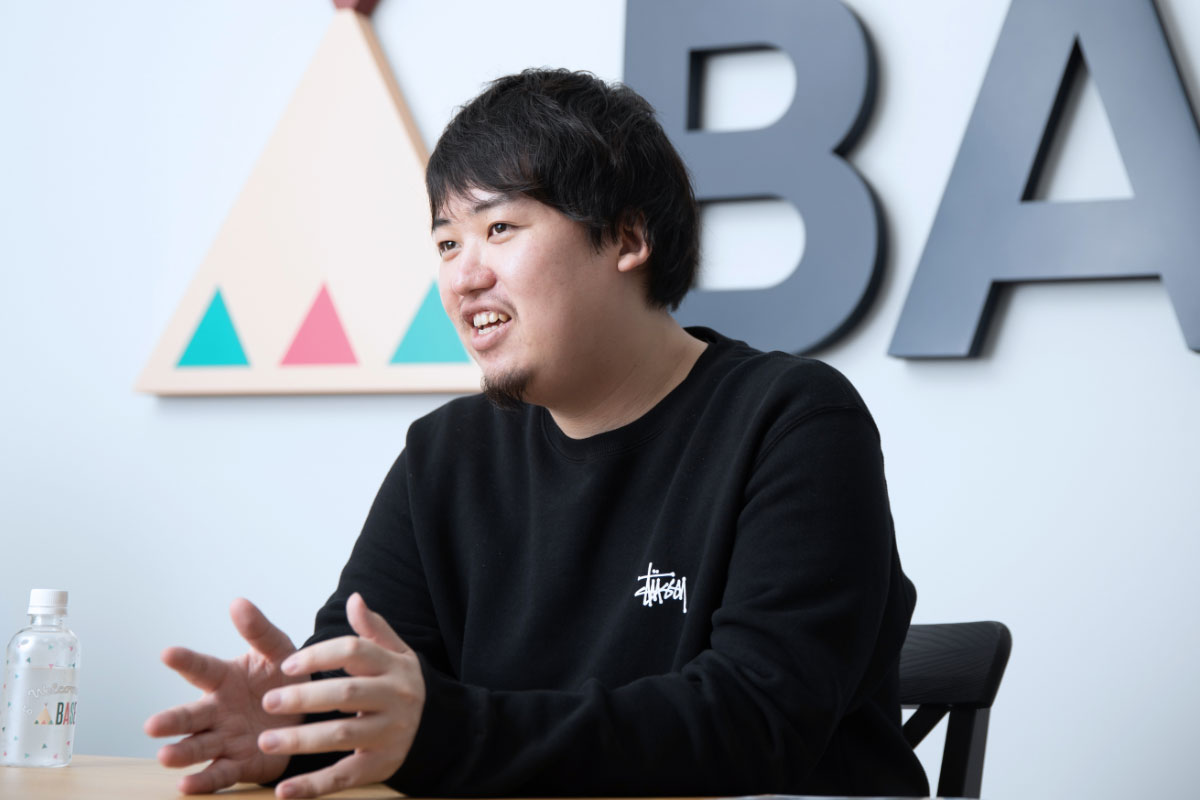 SBI supported us not just with investment, but also with support from various group companies, including SBI Securities and SBI Sumishin Net Bank. It was “total SBI” support, and it has continued even after we became listed. This support was not limited to money. There was also added value that we could not have obtained from ordinary venture capital investments, including support on a business side and enhancing the level of my perspective as an executive.

What do you value as an executive?

I value having ambitious goals and a grand vision. KPIs should not be blindly pursued, nor are they just simple tools for communicating with investors. They are all about achieving our corporate mission and creating a better world. If you neglect this aspect, you end up engaging in short-term management just to make money. It's important to take on challenges with meaning and ambition, and the higher the goal, the longer you can continue taking on new challenges. Mr. Kitao is nearly 40 years older than I am, but he is still always coming up with new goals with his characteristic vitality. He is never satisfied with how things are and is always taking on new challenges. In this respect, his attitude has greatly influenced me.

Our company's performance reflects the hard work of our users, but there is still much our company can do for them. In terms of our market, there is still significant scope for us to support more users, so we aim to take on new challenges with high ideals and aspirations, as we look to offer products and services first in Japan and eventually around the world.